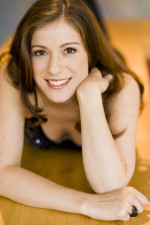 With her radiant, mellow voice, Chilean-Italian soprano Catalina Bertucci has made herself a name on the musical scene. As a laureate of several competitions, including “Vokal genial” (Munich) and the Dr. Luis Sigall International Music Competition in Viña del Mar (Chile), her outstanding talent has rapidly drawn considerable attention.

After a period as a member of the ensemble of soloists at Detmold Opera, Catalina Bertucci started freelancing as a singer in 2012: she has performed in the most well-known auditoriums, opera houses and festivals in South America in Europe. She sang under the baton of Diego Fasolis at the Opera of Lausanne, and has made guest appearances at Vienna Volksoper (in The Magic Flute and Gianni Schicchi), in the opera houses of Wiesbaden, Darmstadt, Dresden, and Santiago (Chile), at the State Operetta House of Dresden, at Knechtsteden Early Music Festival, and at the Halle Handel Festival.

She has also concertized several times with the Leipzig Gewandhaus Orchestra as well as with the Thomaskirche Boys’ Choir in Leipzig under Thomaskantor Gotthold Schwarz, and has gone on tour singing secular Bach cantatas with the Amsterdam Baroque Orchestra conducted by Ton Koopman, including appearances at Vienna Konzerthaus and the Warsaw Philharmonic Concert Hall.

Catalina Bertucci is featured in several CD productions including Mahler’s Symphony No. 4, Carl Reinecke’s Dornröschen (cpo), Luther in Worms with Concerto Köln conducted by Hermann Max (cpo), and Richard Strauss’s opera Feuersnot with Munich Radio Orchestra under the baton of Ulf Schirmer. In 2019 she sang her début as Sophie in Strauss’s Rosenkavalier at Santiago Municipal Theater (Chile), and gave a vocal recital at the Musical Weeks in Frutillar (Chile) accompanied by renowned pianist Helmut Deutsch. Catalina Bertucci studied voice at the Universidad Católica in Chile, at the Hochschule für Musik in Cologne with Prof. Barbara Schlick, and at the Hochschule für Musik in Detmold with Prof. Gerhild Romberger.

Please use only this biography. Changes only after consentment of the artist.